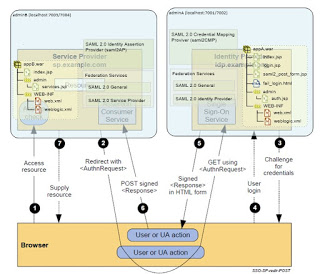 While SAML is already widely used in the industry, the configuration within Weblogic
Server is complex and in most companies not part of the regular routine. We want to have look at a simple SAML example that was published in an article by VikrantSawant in 2007. This former example demonstrates a Web
SSO scenario using SAML 1.1 in Weblogic Server 9.2.
We want to upgrade this example, using SAML 2.0 in Weblogic Server 12.1.3.
This is a tutorial in which we will walk through all the necessary steps to setup and run the SAML 2.0 example. This includes the installation and configuration of weblogic server, creation of two weblogic server domains, installation of the test applications and configuration of the identity provider and service provider domains. To provide a comprehensive overview, the separate tutorial steps are summarized in mind map diagrams. The tutorial comprises a ServiceProvider initiated flow and an Identity Provider initiated flow, which both will be demonstrated during the testing steps. As an addition, the tutorial demonstrates the usage of the weblogic feature “virtual user”.